.@LittleMix's Jade Thirlwall's ✨Girl Groups Who Made #KISSTORY✨ is giving as all those nostalgic feels!

Little Mix has been nominated for the 2021 MTV Hottest Super Star! To vote, simply tweet ‘#MTVHottest Little Mix’ on Twitter!
Voting closes 10am on Monday 23rd August and the winner will be announced on Sunday 29th August on MTV Music.

We're up for MTV Hottest 2021 ☀️🏖 To vote for us, you just need to tweet '#MTVHottest Little Mix' pic.twitter.com/OXAs3j37Nm

Every year, One Young World identifies new leaders who are selected for awards, opportunities, and recognition, or chosen to attend developmental programmes and receive capital support. The team works to accelerate the social impact of Ambassadors in the Community, promoting them through support and opportunities.

We're so excited to be welcoming Singer-songwriter & Trustee of The Black Fund, Leigh-Anne Pinnock to #OYW2021!⁣
⁣
Together with #OYW Ambassador @JamiraBurley, Leigh-Anne will address racial injustice and colourism through the lens of the music industry.⁣ pic.twitter.com/q8XXhnHAga

🌴 How we could do with one of these rn! @LittleMix's 'Holiday' has gone #BRITcertified Gold! 📀 pic.twitter.com/f5GpKNcGQC

Fancy another one? We've added a new Cardiff show to the Confetti Tour 💜 Tix on sale Friday at 9am BST https://t.co/XO5eeyhWWB pic.twitter.com/YLoMNd2yj3 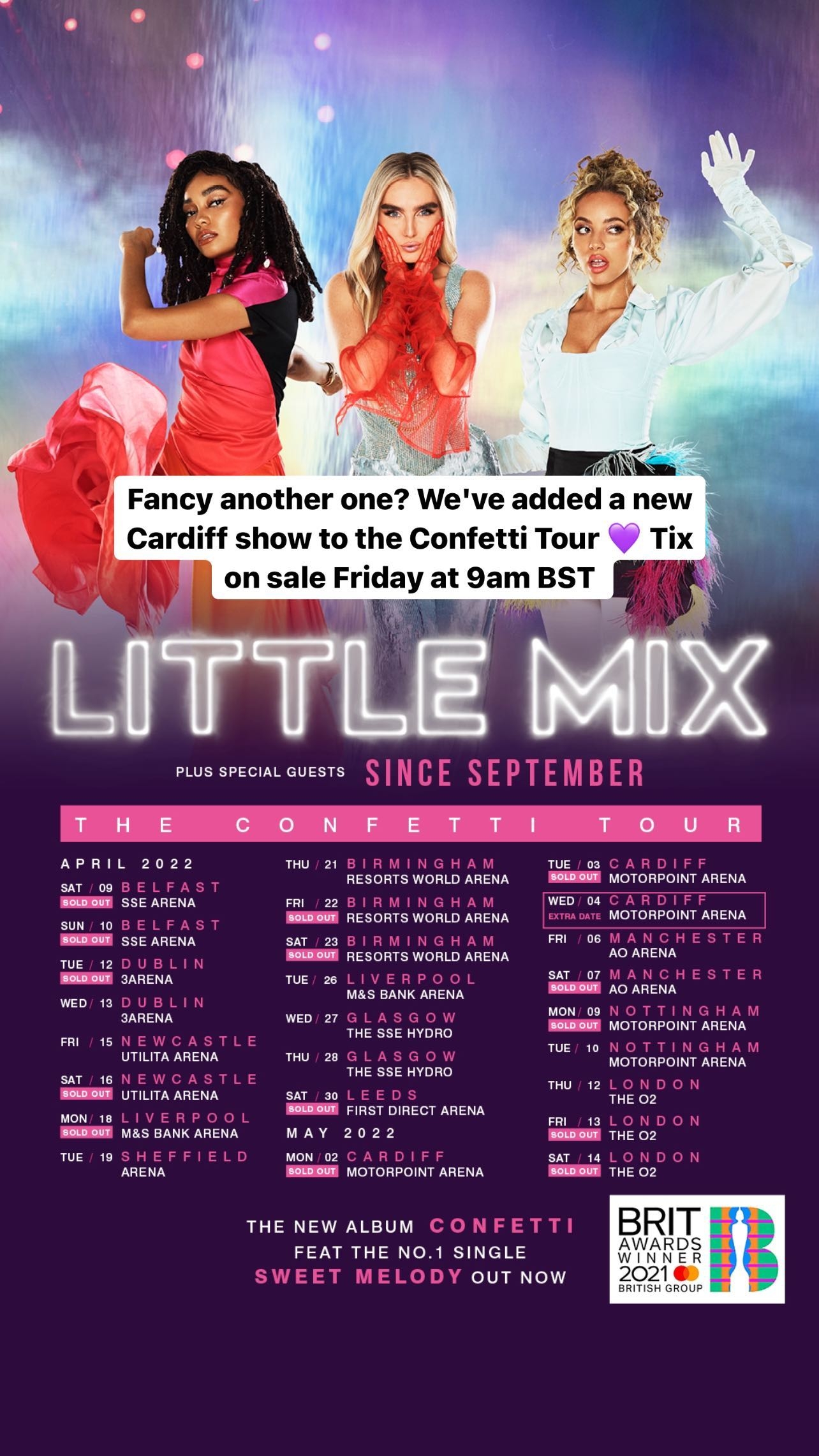 Little Mix’s single “Salute” has been certified Platinum in the UK with over 600K units sold! This is their 15th single to reach so.

👏 Taken from the album of the same name, @LittleMix's 'Salute' is now #BRITcertified Platinum! 💿 pic.twitter.com/xB2hb7pSCo

1 2 3 … 18 Next »
Little Mix
Little Mix is a British girl group consisting of Jade Thirlwall, Leigh-Anne Pinnock, and Perrie Edwards. They competed on the eighth season of The X Factor UK and won. Little Mix’s first single “Wings”, was released on August 26, 2012, it reached number one in the UK and Ireland. Their second single, “DNA” was released on the November 11, 2012, it peaked at number 3 in the UK. Perrie Edwards, Leigh-Anne Pinnock and Jade Thirlwall successfully auditioned as soloists for the eighth series of The X Factor in 2011. READ MORE
Perrie
Jade
Leigh-Anne