In gallery you can see new mini photoshoot of girls taken for WWD: 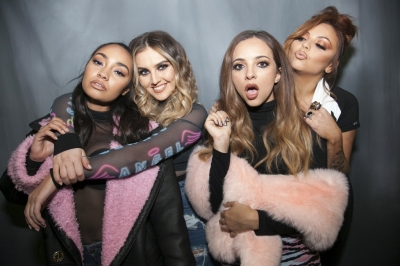 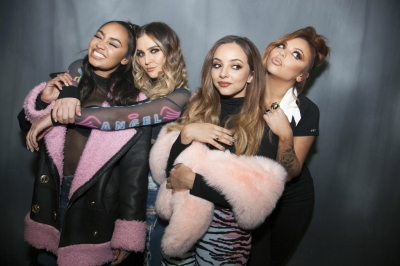 The women of Little Mix — Perrie Edwards, Jesy Nelson, Jade Thirlwall and Leigh-Anne Pinnock — are stacked four across on a couch at NBC’s headquarters in Midtown Manhattan, attempting to argue that they’re just your average twentysomethings.

“We do what we want to do, we act how we want, we wear what we want,” Pinnock says, over the playful chatter of her bandmates. “We’re normal girls.”

Throwing a wrench in this claim is the fact they’ve just wrapped performing on the “Today” show stage for a dedicated pool of fans — many of whom have been eagerly tracking the band since its 2011 victory on the U.K. edition of “The X Factor,” the only group act to do so in the show’s history.

Five years later, three albums and worldwide success, the quartet are setting their sights on the final frontier: breaking the U.S. market. From Thursday, they will join Ariana Grande on the road for her “Dangerous Woman” tour to promote their fourth studio album, “Glory Days.”

“We’re so grateful for every bit of success that we’ve got — our album went to number one for two weeks, and the single ‘Shout Out to My Ex’ went to number one for three weeks [in the U.K.], and it’s just been the most incredible year for us,” says Edwards, serving as a ringleader of sorts for the group’s interviews. “So I think that’s why now we feel more driven and more determined to come to America and have the same kind of success over here. On the Ariana Grande tour, it’s three whole months in America, so we’ll be able to work our little asses off and hope that it’ll do well.”

Breaking into the U.S. with a boost from Grande is a full-circle moment for Edwards, who introduced her bandmates to Grande’s YouTube videos back in days of “X Factor.” “Obsessed,” Edwards says of the pint-sized powerhouse. “I remember the first-ever studio session — this is an interesting fact — we had together as a group; we were sat in there, just like whatever, writing and recording, and I was like, ‘Guys, you have to check out this girl called Ariana Grande — she’s on Nickelodeon and stuff, and she puts covers on YouTube — please listen to her voice, it’s insane.’ And now she’s, like, one of the biggest stars in the world.”

Despite their age — Edwards is the youngest at 23, and Nelson and Pinnock are the oldest at 25 — five years in the spotlight has given them more than enough experiences for solid material.

“I think what’s different about this album is we knew exactly what we wanted to do with it; we put our hearts in it and it’s such an honest album,” Nelson says. “We literally wrote about every experience that we’ve gone through in the last five years, whether it be bad or good. We think [our music has] matured so much more.”

In that vein, it’s the music, they believe, that makes this the right time for American audiences to take a liking to them. “I think we’ve just got the right song. ‘Shout Out to My Ex’ is undeniable, I think,” Thirlwall says. “And every time we have come previously, obviously we love all our music, but it just hasn’t connected enough to explode. Whereas we feel like this could be it. It’s just a matter of timing.”